The goal of this chapter is to show the (creative) possibilities of our dynamic video platform and to inspire you to come up with awesome and effective video campaigns by making multiple creative variations. There are multiple ways we can enrich video, with: 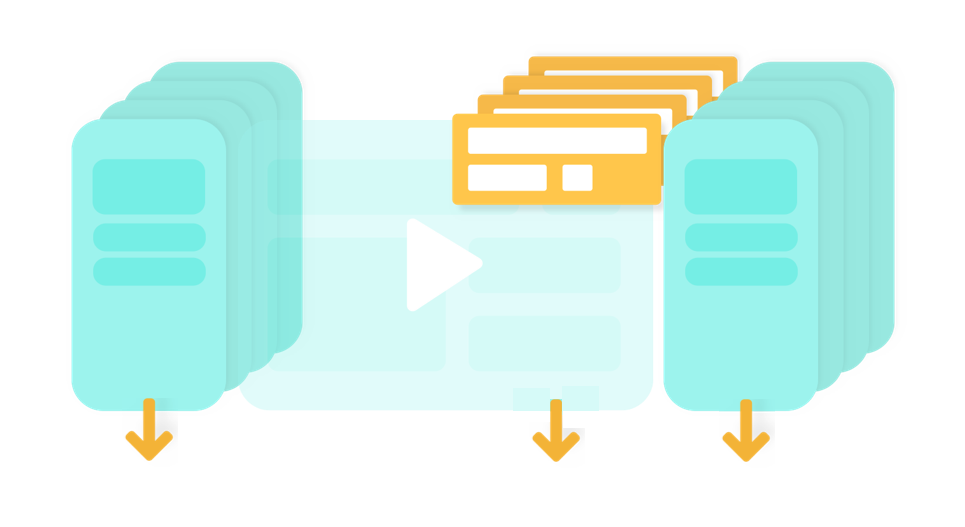 To make an existing video more relevant add dynamic intro's, outro's and overlays. Our overlays are hardcoded into the videofile (.mp4) making them compatible with every player and device.

Extending the experience by showing personal data in owned channels or adjusting the message based on personal data. Throughout the video personal information can be shown or be the driver to swap scenes

Our overlays are hardcoded into the videofile (.mp4) making them compatible with every player and device.

Add dynamic intro's, outro's and layovers. Our overlays are hardcoded into the videofile (.mp4) making them compatible with every player and device.

Determine most relevant scene & find and replace images, text, audio or video in video within the ad.

Extending the experience by showing personal data in owned channels or adjusting the message based on personal data.

Throughout the video personal information can be shown or be the driver to swap scenes.

A dynamic intro boosts the relevance of the first seconds. A more relevant intro triggers the attention of the viewer. Let's look at some examples:

In this hyper segmented video ad for Porsche the viewer is directly addressed based on his location of residence. “Will you be driving the next Porsche in

In this dynamic intro for a stroller manufacturer the purchase history of the viewer is used to trigger their attention. By showing the product they already own before the main creative and referring to the first stroll they took with their little one(s) the engagement is increased, making the add that follows more relevant.

In this dynamic video ad for a skin product especially manufactured for neutralizing the damaging effects of urban life, i.e. air pollution, the intro engages the targeted viewers by showing the city they live in. ’Can your skin handle the city?’ is the question the ad poses. By visually adding the city of residence of the viewer to the equation the relevance gets a huge boost.

The dynamic overlays shown above are used in an after movie for a zoo. The video is sent to visitors at the end of the day. This way the experience is extended to outside of the park fences.

The overlays in this video use the day of visit and a public database to access actual weather data - temperature (celsius) and weather type (sunny, changeable, rainy). This is combined with footage of an animal that is either sunbathing, shaking off water or taking a relaxing swim, and a corresponding message in the voice-over:

”We hope you had a fantastic day”. Followed by:
“The weather certainly was!” [Sunny] or;
“Despite of the rain.” [Rainy] or;
“Although the weather was a bit volatile.” [Changeable]

These dynamic overlays are used in an retailer’s video ad that show manufacturer’s products and promotions. All five key features are shown in the overlay, but based on the profile of the viewer one of them is highlighted and the corresponding video images are shown.

In this dynamic video ad - promoting occupational disability insurance for freelancers - different people of different ages and occupations are shown that match that of the viewer. Then confronting them with a fact what it would mean for them specifically if they would become incapacitated.

A dynamic outro boosts the relevance of the last few seconds for every specific viewer. Which makes the call to action much more powerful. Relevance can be boosted in different ways. For instance, by changing the message into a specific language, by showing a different product based on gender, the time of day, purchase history, pricing (discounts) or the local reseller (store location) and if there isn’t one nearby, directing the viewer to the web shop.

In this Christmas retargeting ad for a Dutch retailer there were multiple call to actions possible. Based on the most likely buyers persona of the retargeted viewer the right outro overlay was shown in the blue corner:

The product category the retargeted viewer was browsing during his session on the website, was also shown in the ad, varying from Christmas lights to Men’s clothing. To create a sense of urgency and stimulate people to do their Christmas shopping in time a dynamic day counter was used, showing how many nights of sleep were left before Christmas.

As written before, besides using dynamic intro’s, overlays and outro’s to make existing video’s more relevant, you can also make larger parts of video’s dynamic.

When you have no existing video in place, and are in the opportunity to create one from scratch, you have the possibility to create dynamic scenes to be fully relevant for your targeted audiences. Thus creating unique video’s by swapping scenes. And aligning category based messages with the interests and needs that best suit your viewers.

For example, in the video below a producer of climate control equipment for crops targets their audience by adjusting the video content to the reality of each unique viewer. The crop that’s shown in the video aligns with the crop of the targeted grower, whether it’s tomatoes, strawberries or orchids.

In this video a college gives a warm welcome to their new students and gives them a tour of their new faculty. The structure and message of the video is the same, but the scenes swap depending on the study and faculty of the viewer. So a chemistry student sees other images than someone who’s studying to become a teacher.

Throughout a video as a whole you can also swap text, images, audio or even video in video within scenes to align your message with the situation of the viewer. In this ad for an airliner the departure date (text) and destination (text+image) are altered to match the recipients.

On top of dynamic intro’s, overlays, outro’s and scenes you can also personalize your video content within your owned channels when you have personal data available. You can either show personal information or adjust the message based on that personal information, to make the content more relevant.

Did this answer your question? Thanks for the feedback There was a problem submitting your feedback. Please try again later.